Home
Why I became a Lawyer?

Why I became a Lawyer?

I was in the eighth grade and approximately 13 years old when I decided that I either wanted to become a golf pro or a lawyer. After graduating from high school, I was one of the best golfers in the State of Mississippi and received a golf scholarship to the University of Mississippi (Ole Miss). My freshman year, I became a pledge in one of the fraternities on the Ole Miss Campus among 50 other pledges. After the first semester, only 10 of the 50 pledges made passing grades. 40 of the pledges flunked out of college. Of the 10 pledges that made their grades the first semester, three of us became lawyers, two of us became doctors, and one of us became a flight instructor in the Navy. I knew then that I must have some common sense and hard-working ability to succeed in school. I went to a local community college for my sophomore year. My junior year, I returned to Ole Miss and graduated with a business degree. Two weeks later, I entered the University of Mississippi School of Law. Because I was paying my own way through law school, my goal was to finish the three year curriculum course in two years and three months. I worked extra jobs during college, in addition to obtaining student loans. I took extra courses during the summertime in order to complete law school early. At that time, my income was below the average poverty level for the country.

Midway through my law school career, my father became paralyzed and I had to miss one summer of law school to help take care of my father. While I was taking care of my father, I worked for a local law firm as a law clerk and learned valuable experience in how a law firm operated. When I returned to law school, I had a new-found knowledge that assisted me in my classes. Also, while I was in law school, I was the President of the legal fraternity, President of the Lamar Society of International Law, and I drafted legislation which was passed by the Mississippi lawmakers. I graduated law school, which took two years and six months instead of two years and three months. Of the 360 students who started law school when I did, only 80 graduated.

After graduating from law school, I started working for the law firm of Barnett, Montgomery, McClintock & Cunningham. Ross Barnett was an ex-governor of Mississippi. These lawyers were trial lawyers and I received valuable experience learning how to try cases while working for this firm. I tried 10 jury trials by myself my first year out of law school. After a year and a half of working at the law firm, I went out on my own and have been on my own ever since. I was the youngest President of the Hinds County Trial Lawyers Association and joined numerous organizations during my career.

I have devoted my career to representing individuals who have been injured or killed in accidents or wronged by big corporations and insurance companies. I represent the little guy against the large businesses and corporations who try to take advantage of the less fortunate. There is nothing more satisfying than taking on one of the biggest corporations in the world and making them answer for the problems they have caused numerous victims. I am proud to be a trial lawyer who represents individuals against corporate America.

When those who have been injured or killed have nowhere else to turn, they turn to me. I believe one of my goals and duties as a human being is to help others. I am always in favor of the underdog. When we walk into the courtroom, there is no other place on this planet where an individual can stand on equal footing with a huge corporate defendant. This is the war that I fight. It is waged on a battlefield at which I gladly stand. My strength is derived from the belief that my God-given talents are given to me for a reason. My goal is to make myself available to those who have been wronged by others’ misconduct. It is not a glamorous calling and there is no guaranteed income. My goal is to achieve justice for my clients, working to right wrongs, not hide them, working against the wrongdoers, not for them. At the end of the day, I know that I have given someone without hope a fighting chance.

I have litigated and settled just about any type of accident or injury case that you can think of. I have spoken at seminars and taught other lawyers how to handle accident and injury cases across the country. I have written numerous articles, also teaching other lawyers how to handle these type of cases. A lot of lawyers hire my law firm in order to represent their clients in working-up serious injury and death cases.

If someone asked me what kind of lawyer I am, I say I am a trial lawyer. I believe in America, our form of government, individual freedom, and our American legal system. I represent and help people to protect, enforce and preserve those precious rights and individual freedoms which were so wisely granted by the founding fathers of our great nation. The spark that was ignited in me has kept me satisfied during my trial practice career. I am proud to be an American and I am especially proud to be a trial lawyer.

One day, we will all be judged for our actions. As far as my actions go as a plaintiff attorney, I look forward to placing them before the ultimate judge. I represent plaintiffs and I would not change that for all the world.

He who shuts his ear to the cry of the poor will also cry himself and not be answered. Proverbs 21:13. 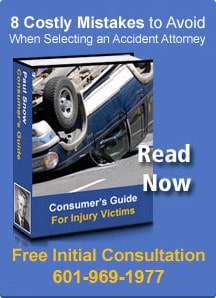 Referring Attorney Resources
What We Do